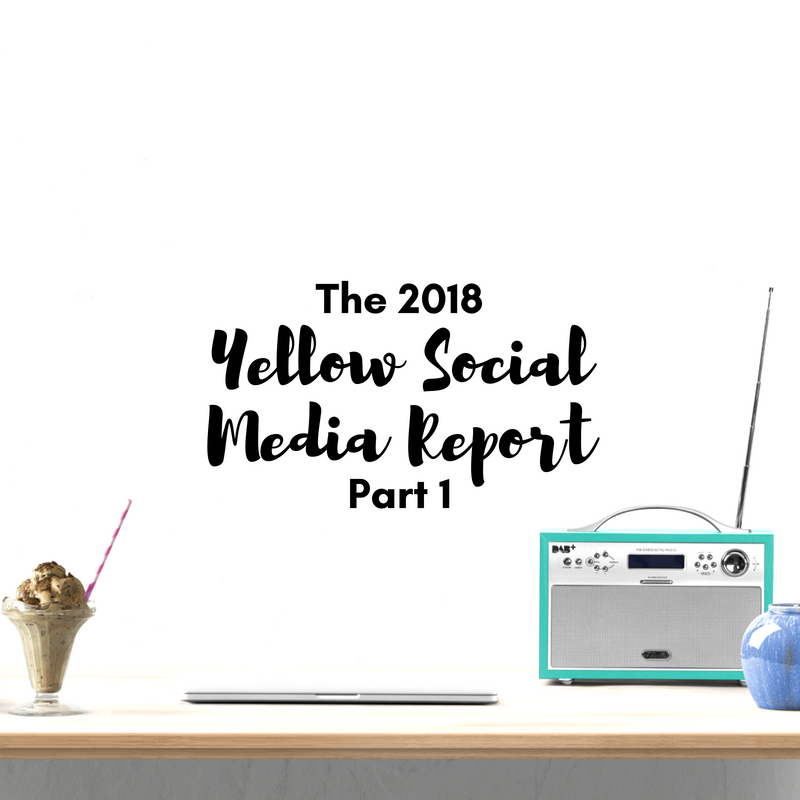 A Yellow rose by any other name…

The much-loved Sensis Social Media Report has changed its name. It’s now the Yellow Social Media Report. But what’s in a name? It’s still going to give you the same delicious stats and facts as always, just with a brighter background.

If you’re into Social Media, or data about the way businesses are using it, this report has something for you!

For the last 2 years I have brought you a TL;DR (Too Long; Didn’t Read) summary of the report, and it’s always one of my most-read posts! This year I’m doing it again. I’ll highlight my main takeaways of the report from my opinion as a Social Media practitioner in regard to the way Western Australian’s and WA businesses are using Social Media.

Why the Yellow Social Media Report?

Why do we love this report so much?

The main reason the Australian Social Media community gets excited about this particular report is because even though there’s a LOT of data out there, it can be tough to find anything that reflects an Australian audience. We’re a big country with a small population and we just aren’t like anyone else.

Another reason is it’s incredibly important to stay up to date in this fast-moving industry. Trends shift in the blink of an eye, and as a Social Media professional (or a small business owner looking after your own businesses Socials) you need to keep up with usage trends to get the best from your efforts.

The Yellow Social Media Report has been asking (mostly) the same questions for the past 7 years, so it’s become somewhat of an authority piece.

Did you know that the first thing nearly 60% of Australians do every day is use Social Media? It’s how they finish their day, too! I know I’m in that 60%…

62% of Australians use Social Media daily to connect to friends and family – and 60% open their Social Media more than 5 times per day, across an average of 3.5 “internet connected” devices.

Mostly we’re there to connect with people we know – but 44% of Aussies follow brands on Social (up from 25% last year) and they are using your presence to find out more about your business and check your reviews.

People tell me Facebook is dead. Or that it “doesn’t work for my business” but maybe you’re not giving your audience what it wants, because it’s the most widely used Social Media platform in Australia – consuming an average of 10 hours per week of our time.

94% of Western Australians surveyed use Facebook, and it’s the same as last years result, despite people saying they’re going to #deletefacebook. This is also way out in front of second placed YouTube at 44%.

It’s the same when we move to private messaging services, with Facebook Messenger coming out way in front in WA 79% for Messenger and 30% for Facebook’s other messenger option – WhatsApp. None of the others even came close.

Us sandgropers are not really embracing Facebook live – with 79% saying they have neither watched nor published a Live broadcast. Are we a bit behind? A bit camera-shy? Maybe we’ll catch up in next years report…

We’re also behind all other states when it comes to publishing Snapchat, Instagram & Facebook Stories with 74% saying they have never published a story on the 3 channels.

Why do we need to know all this stuff about how people use the platforms? Because it’ll help us as brands get our messages seen and acted on most effectively.

33% of us check out a brand’s social media presence before making our first online purchase from them. WHat if there’s nothing there when they look? Or something old and out of date? Not a good look!

40% of West Aussies said they had provided an online review (we’re the second last state for this – coming in last is SA) and people from the ACT shared the most opinions with 52%.

Only 12% of WA folks said they stopped following a brand in the past year. Mostly they did this because their content was irrelevant or unappealing – or they just posted too often.

We’re also the state who cares least about likes, and the least likely to check our phones while eating with family and friends, so that’s good news.

So there you have it – that’s the Part 1 wrap up – Part 2 of the report should be out soon, letting us know more about brands and businesses use of Social Media.

What did you think of my wrapup of the report? Or the Yellow Social Media Report itself? Any surprises?

Want more? You can read the full report here.