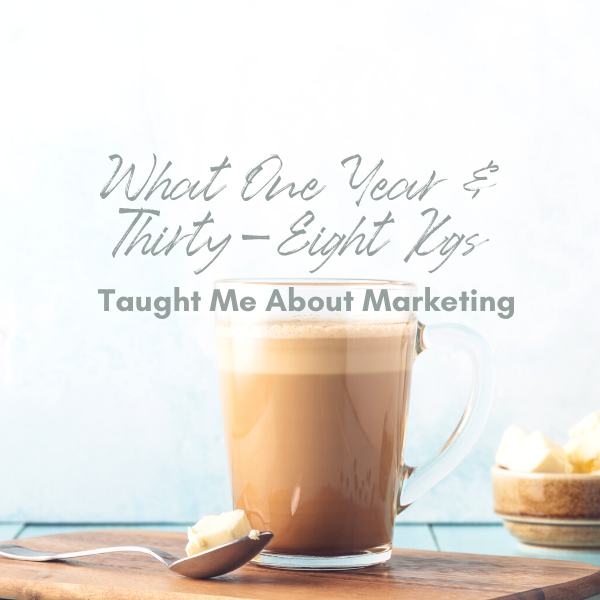 I’ve asked a lot from my body this year – and it’s taught me a lot!

In October last year, on a whim I decided to start following a keto diet. I didn’t know that much about it and thought it sounded simple. It’s not really…I mean the premise is straightforward enough but the execution is more involved than I first assumed.

Essentially the way of eating (WOE) involves teaching your body to burn fat instead of carbs for fuel – like switching your car from diesel to petrol, and to do this you follow a macro ratio of 5% carbs, 25% protein and 70% healthy fats.

Look at me talking about macros! Who is this person?

I know I’ve lost some of you already and I promise this isn’t a diet blog so that’s really all the detail I’m going to go into about Keto. If you’re interested you can leave me a comment or get in touch and I’ll happily answer questions.

How is losing a significant amount of weight like marketing?

ONE: Have a goal

Have a goal, but keep it fluid. Things change and the original goal might not suit you as time moves on so review it regularly to stay on track.

TWO: Decide how to measure success

Scales are  easy to use, but they don’t give you the whole picture. You need to see how you fit in your jeans, what your percentage of body fat is, or measure yourself in inches to get a better picture of your progress.

Same with marketing – one source of data is not enough to make strategic decisions. Diversify your measurement tools.

You might check in with your marketing daily (just like getting on the scales) but are those real data points you need to consider as part of a wider trend? Or simply daily fluctuations?

Yes – you need to measure often to make sure you’re on track to your goals but don’t get bogged down in the daily results if you’re still meeting your milestones.

You can’t eat one salad after a lifetime of eating donuts and expect that it’s going to have a huge impact (salads aren’t really a keto thing but you hear what I’m sayin’).

You have to be disciplined enough to show up consistently and work toward achieving your goals.

You’re only kidding yourself if you think your bootstrapped start-up is going to be Nike in 6 months.

Set yourself up for success by keepin’ it real.

SIX: Have a plan for when you fail

Sounds fatalistic doesn’t it? But inevitably campaigns (and diets) fail. It’s what you’re going to do to fix it that’s important.

So you had some days with no conversion, or you ate a whole tub of ice-cream…ok – what now? How you recover is more important than beating yourself up that it happened.

It’s not “the recession” or “the algorithm” when your campaigns fall flat. The same way it’s not Christmas’ fault that you ate 3 slices of pavlova…those things might make success more challenging, but they aren’t a deal breaker.

There’s literally people out there killin’ it (in both a diet and business sense) so stop playing the blame game and take responsibility over the things you can control.

Example? If you’re video has poor performance past the 1.20 sec mark, see if a re-edit can save you.

The longer you have been at it, the more you’ll make better decisions you’ll on adding activity to the mix.

It’s important to take time to reflect on your wins. That goes for everything. There’s so much uncertainty around that it’s really important to allow yourself to feel proud/content/happy when you are getting results.

My final one in the list is one of the most important. Sometimes you’re too close to things to see them clearly. Or you might not have the technical skills that someone else in your network possesses. Ask for help!

We’re social animals and we can’t operate alone. You’ll be surprised how many people out there will lend you a hand, an ear, or some advice.

Thanks for indulging me in a little left of centre thinking, comparing my year of keto and 38kg weight loss to how to run marketing campaigns.

Drop me a comment and let me know what you think.