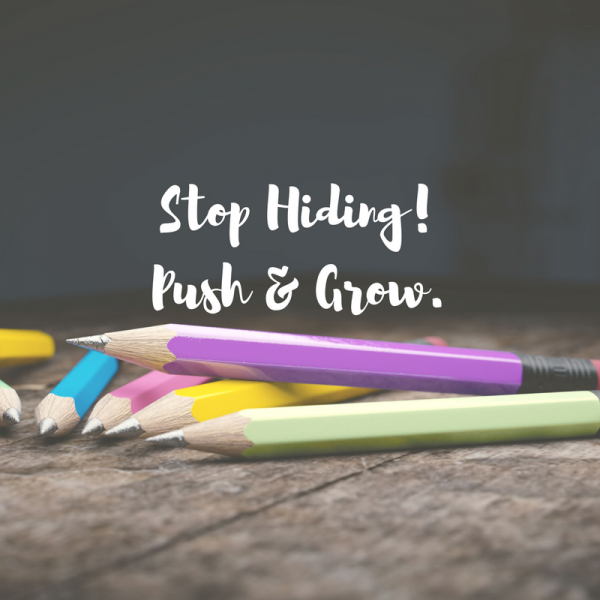 My blog is normally about Social Media or Digital Marketing – but I wanted to share something a bit different today. I want to talk about evolution. Not the “we walked out of a swamp” sciency stuff. The personal kind.

I hope you indulge me a personal piece that I was prompted to write after hearing business owners complain about their business progress.

Most businesses don’t start and then get overwhelmed with orders. That’s just not the way the real world works.

You might not know this about me but I’m a hider. I sometimes wish I actually was a chameleon…because when I get scared I like to hide and pretend that everything’s fine, and working for yourself you have to get used to a certain level of scared.

This type of fear can be hard to get used to, but in reality I don‘t see freelancing, consulting, or working in your own business to be essentially any more ‘risky’ than having a full time job.

People who’ve recently been made redundant can probably feel me. Tradesmen who have their own businesses would get it, and anyone from the mining sector would definitely understand. Being employed is not a static state like it may have once been.

So if it’s no more risky then what’s the scary part?

Relying on yourself alone to collect a steady income.

It’s not because the work isn’t there – it’s that it’s YOU, and often only you as an entrepreneur, micro-business or whatever you call yourself that has to drive everything. From the strategy, to the implementation, to the admin…it’s all you.

I’ll be the first to admit this lifestyle isn’t for everyone, but with the future of work facing new challenges from technology and automation every day one can’t hide from the fact that this model will be more and more common.

So why am I sharing these thoughts with you here?

Because I get it. It’s a challenge. And if you’re running a small business or your out on your own it’s a constant juggle – it’s not without its perks. But I also wanted to highlight that if you’ve started this journey that you might have to hang on to see results.

You need to push yourself (because no-one else’s going to!)

If I reflect on my own journey over the past (almost) two years I’ve been through many phases. I had plenty of my own clients and some agency contracts. My client load fluctuated (for many reasons) and at the moment it’s the contracts that have kept me going.

Many can relate to this. It’s frustrating, it’s often daunting. It’s definitely the cause of some financial insecurity, but it’s certainly shaping and teaching me along the way.

I’ve recently done some things that scared me – and I want to encourage you to hang in there and do the same; to just keep on pushing, the next phase of your businesses is just around the corner.

I took a gig delivering Social Media workshops. I have done loads of this type of training before, but not in a formal setting with attendees I didn’t know. I was nervous as to how I would be received. After the first session and some tweaking of the content to better fit the audience I had great success with these projects. I got more confident in what I knew and my ability to communicate my knowledge to a varied and inexperienced room increased dramatically.

I learned to better explain how what I do grows a business, to people who don’t usually talk my lingo. I learned a LOT about the challenges business owners face when trying to do their own marketing.

One of the reason my first session was not as successful as it could have been was that I pitched my ‘beginner’ course too advanced. I had forgotten just where the beginning was. I was worried that my audience would see me as a fraud, so I concentrated too heavily on “adding value” rather than keeping it simple enough for non-industry, non-tech savvy people to get the most out of it. It was my insecurity that they wouldn’t learn enough from me that saw me endeavour to teach them too much.

The reality was – they weren’t ready for so much so fast.

Once I refined the course the next time I delivered it, it was a smash hit (if I do say so myself!).

Another project I tackled recently was to talk to some uni students about Social Media as a career and how I got started. My presentation involved an overview of useful industry skills that they need to expand on before they’re ready to join the workforce. I took an experiential learning approach and gave them a practical activity to start – followed by plenty of Q&A.

I was really nervous about this too, I mean these guys were studying marketing. I didn’t study marketing. I barely got through 8 months of an Arts degree! Would I have anything useful to share with them? Or would they find out I was a fraud! But I went along, and I had a blast! I even did it again with another student group a couple of weeks later.

Same theme. Same result. Same self-doubt. How crazy! I DO know what I’m doing. I live off my skills, it earns me a great living. It’s funny how our internal dialogue always want to self-sabotage. But I pushed on.

I sent an email to a connection who was looking for a full time employee, essentially doing what I do and asked them if they’d consider taking me on until they found the right person to join their team full time.

I met with them and I got some contract work, causing them to re-evaluate their need for a full time position in that role. Excellent for me and a smarter outcome for the business, they recognised the role they needed to recruit for was a different one.

Never be scared to ask; we are all in sales. Don’t ask, don’t get.

I was contacted by Al Jazeera (not a terrorist organisation) to contribute a 1 minute video about a current issue around Social Media Marketing that had hit the mainstream media.

I want to be confident enough to do more video content and live video, “but I’m not ready!” I told myself. (There’s that self-doubt again!).

I said yes. I had to webcam myself talking for one minute. Doesn’t sounds like a long time; 60 seconds is hardly an epic. Most people would have shot it, sent it, and moved on pretty quickly.

Not me. I took 40 takes (give or take, lol), then I sent it. And my doubt convinced me that they probably wouldn’t use it – because what after all did I have to offer?

Now I have to stop worrying about whether I have something to offer or not. It’s time to get on with it. There’ll always be something to worry about, but I think I’m done with this self-doubt. At least for now.

There’s been bigger meetings, with more lined up, meetings old me would have been scared to take.

I’ve expanded services without having to haggle over small fees I may have charged in the past.

But the most exciting lesson I want to share with you is that if I can do it in my business – you can in yours too! We all go through professional ups and downs, that’s life – but if you have skill, passion, integrity, experience, and be authentic to you, you’ve got the recipe to succeed.

You just have to push through the scary barrier and keep going. What’s just round the corner is up to you!
While there’ll always be an ebb and flow – you can swim, so the tide needn’t be scary.